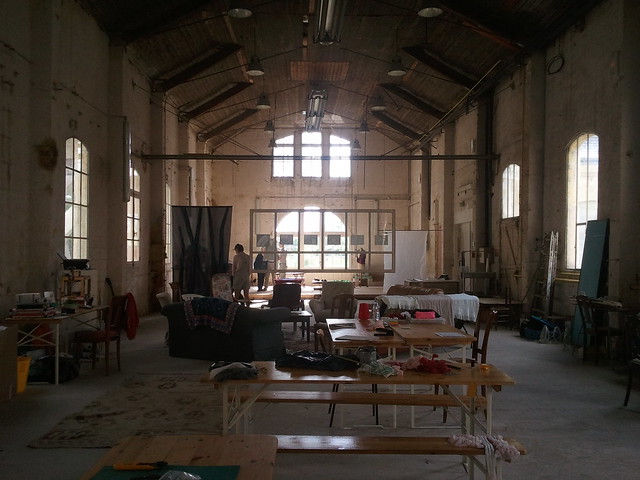 This past July I got to participate in a week-long camp that I think will remain a top highlight of 2014. I attended the E-Textile Summer Camp 2014Â at the Paillard Centre dâ€™Art Contemporain & RÃ©sidence dâ€™Artistes. I was accepted last year, but then was gutted when my passport and visa didn’t arrive in time from the UK government to let me travel. (I didn’t know it then, but I wouldn’t receive it for another 5 months past the camp, so it wasn’t really a close call. Thanks, Theresa May.) So I was super eager to attend this year.

The idea is similar to /dev/fort, except instead of working on a new web-based project, you get a group of people interested in things like how to 3D print shapes that will easily interface between electrical components and knit circuits directly in machine knitting. 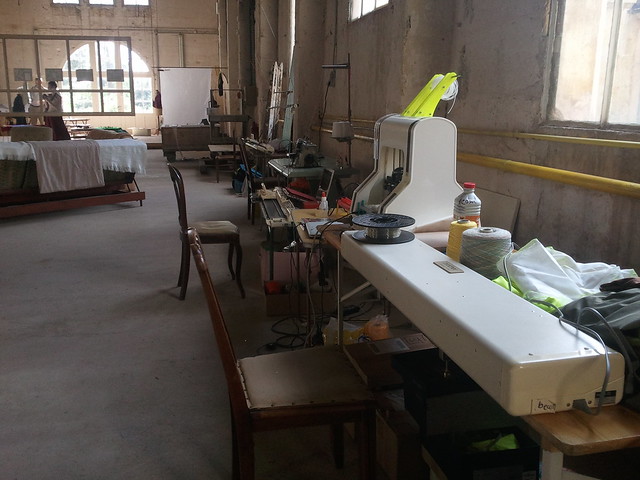 Below is the time-lapse footage of the main space where most of the work happened. It was filled with knitting machines, 3D printers, sewing machines, soldering irons, etc. Part of the exhibition of work from everyone attending is at the far end of the room.

I showed the Human Harp. I brought along the first version of the hardware as the current version was being assembled that week in London. 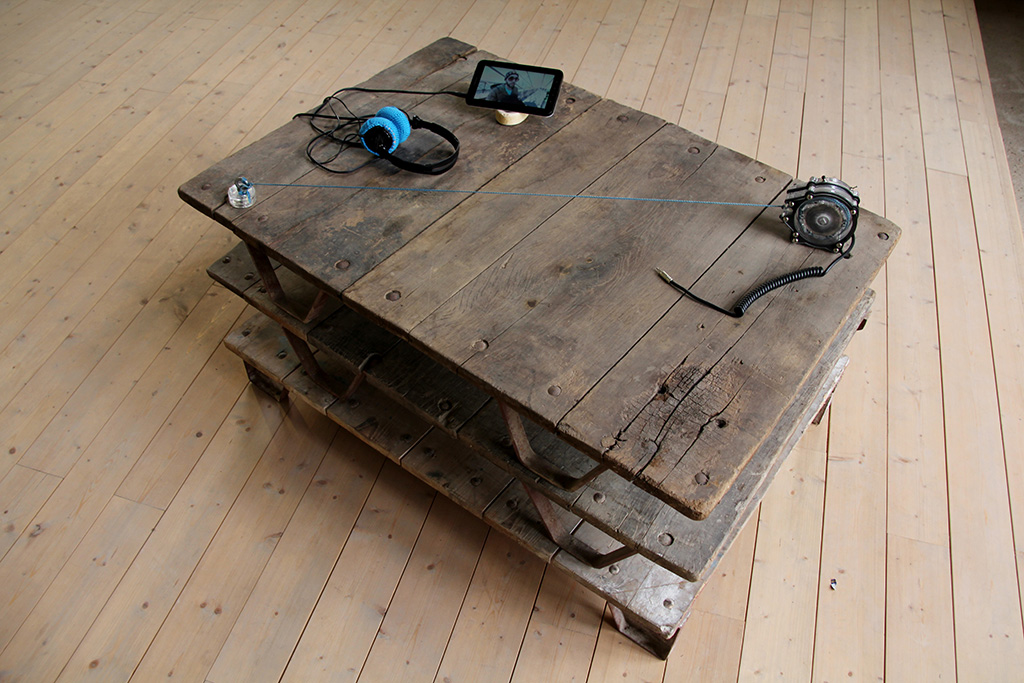 There was a second room where the screen printing happened and all meals were had around a giant table in the sunshine outside.

The morning workshops of the first day were focused on hand crafting techniques without integrating technology. I started with Igne Oyasi, a Turkish embroidery technique. It was a little slow going, but always is when learning something new. The below photo is certainly not my work, but examples Mika had brought from her trip to Turkey where she and Hannah learned the technique. 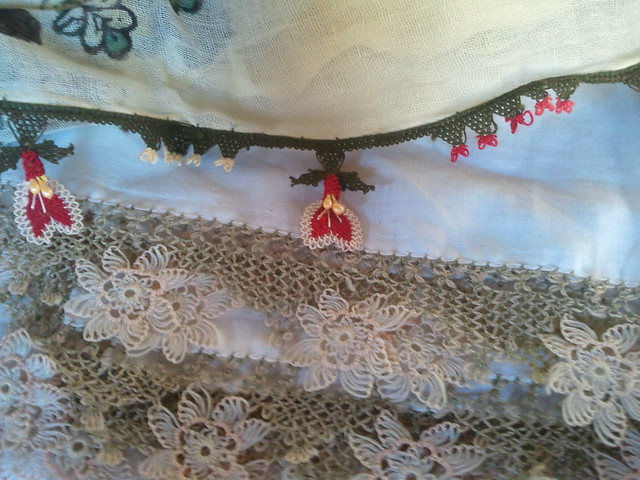 I squeezed in a second workshop by joining Hannah’s Relief Embroidery Workshop. My sample is the one on the upper left below. It’s the technique used in lederhosen. I’m curious whether it would work on thick felt. 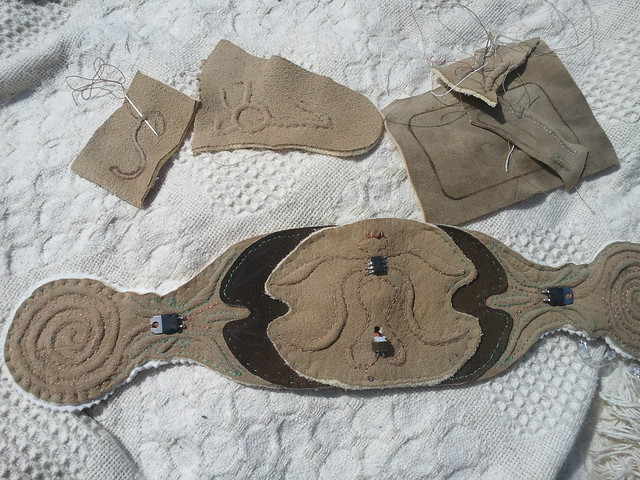 The afternoon was a panel discussion on kitsch and e-textiles. It was incredibly interesting especially as everyone present was very experienced in the field – we were all past sewing our first LEDs onto a scrap of fabric. It gave some distance and self-reflection. Questions discussed and proposed were things like is the Lilypad Arduino kitsch? If kitsch objects are devoid of critique and you are merely displaying bio-metrics in LEDs on clothing without any layers of interpretation, is that kitsch? It was a discussion that continued throughout the week. 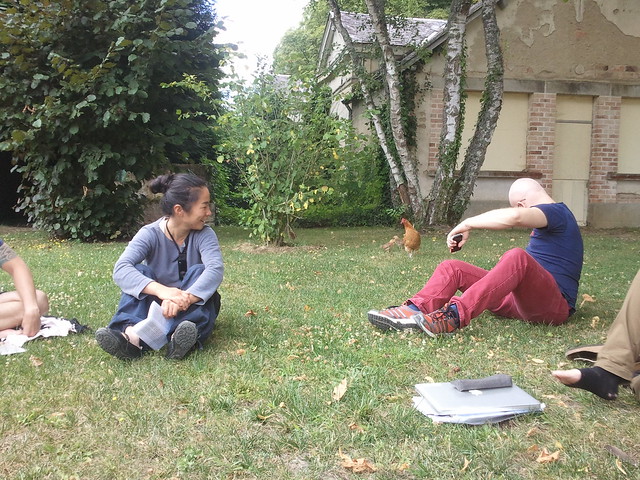 The discussion was augmented by the chickens who joined for a bit.

The second day was my time screen printing and I fell in love. I haven’t bought any screens and equipment yet, but I think it’s happening very soon.

We worked with thermochromic inks – pigments that become transparent when heated. Sara prepared amazing patterns on screens for us to use. The color theory and wheel I first learned from my elementary school art teacher, Mrs. Fish (real name, I swear), were put to good use.

Thermochromic Workshop in 1 min from mikst on Vimeo. 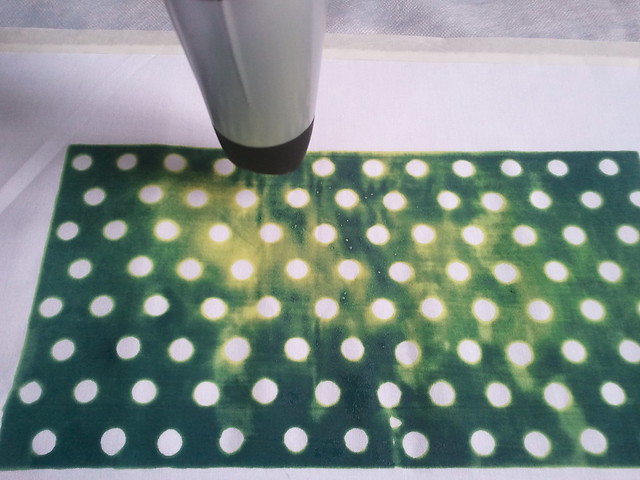 Below is the screen printing room. The closest print in the photo is one of mine. 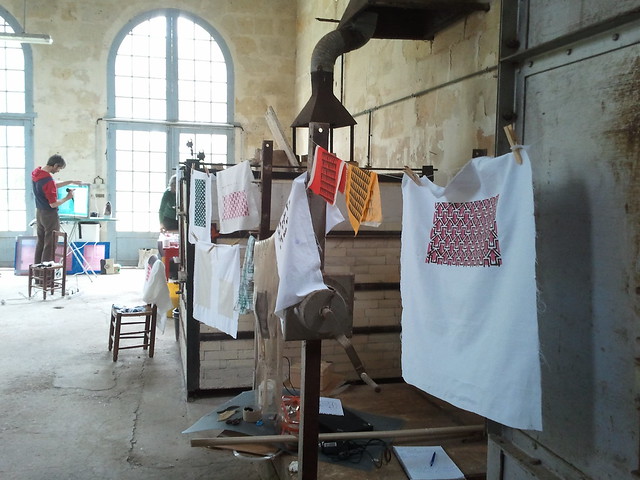 We also screen printed unadulterated joy onto black silk: liquid crystals. There is no greater joy. 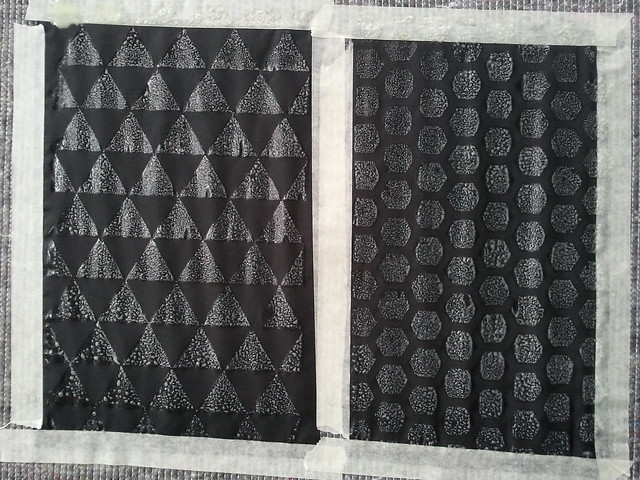 After lunch we went through the swatch book. I didn’t participate this year, which was still the right decision as it takes a TON of time to do, but I’m still sad to not have. The way it works is that each participant makes around 20 of the same sample which are all gathered and put into books at the camp. It is an absolutely unique and priceless object – I have last year’s. The only wayÂ to get a book is to contribute. I will certainly doing so next year.

Below are Emilie’s swatches being added to all the books. 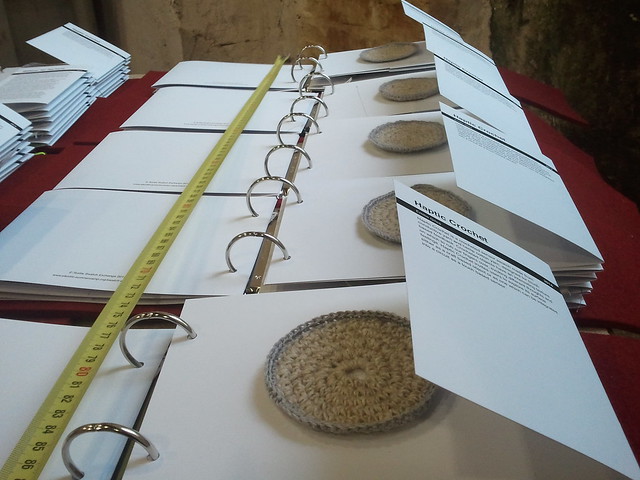 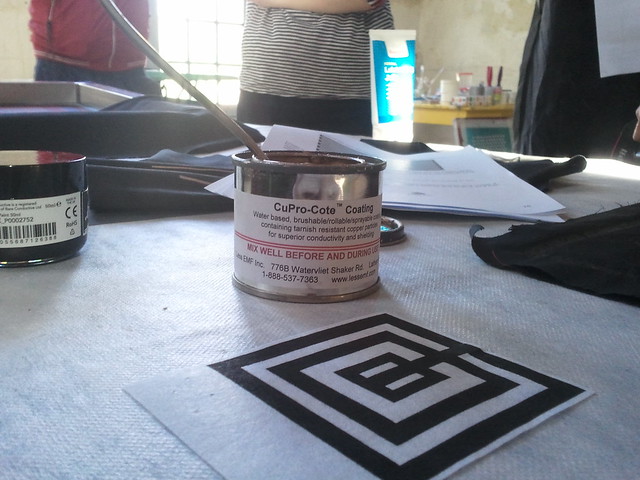 Mika asked Beam and I to lead a workshop on energy harvesting. I was a really crap co-instructor and wasn’t able to contribute much to the prep. Beam did great though and I assisted when I could.

We held the workshop outside where we ate all of our meals. 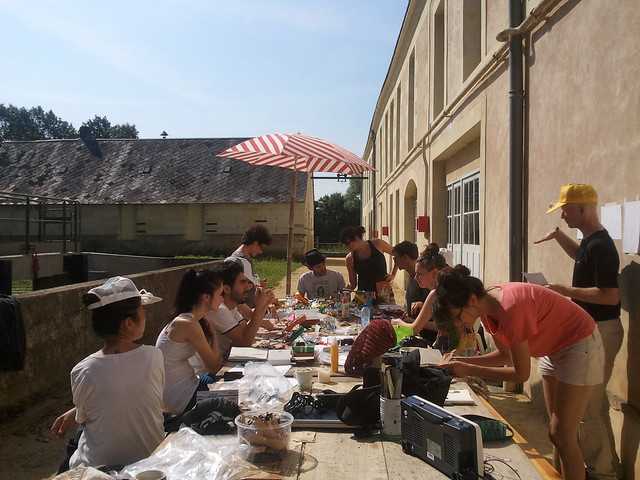 The majority of the last two days were time to develop our own projects. Nothing was really completed, it was more a series of experiments.

Irene and I made a macramÃ© bracelet. 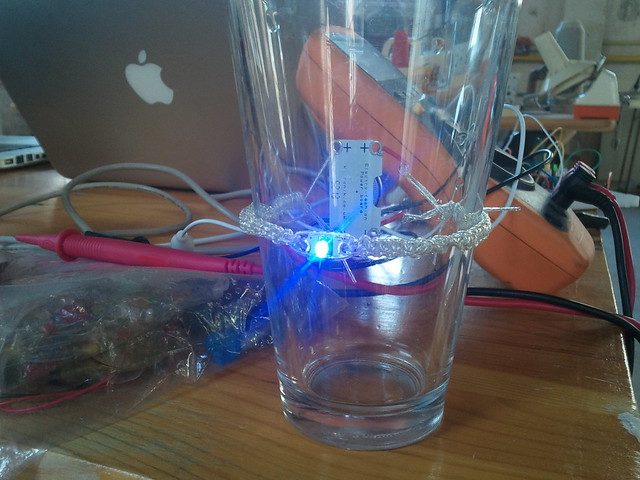 Hannah brought up the idea of making soft actuators, since so much work had been done on soft sensors. We worked as a group for a little while on building motors with hand crafting techniques. Hannah made an Igne Oyasi motor: 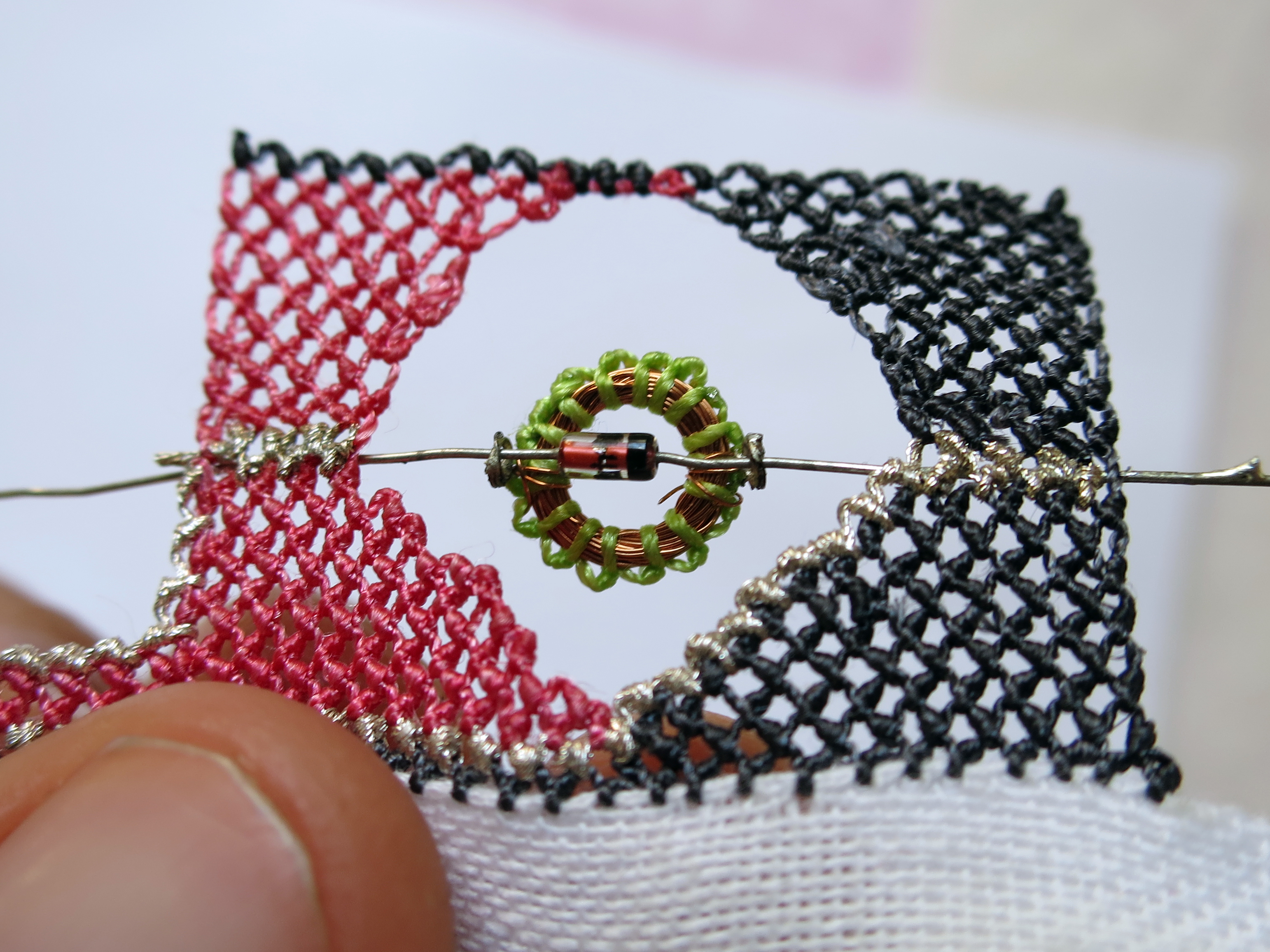 And Pauline prototyped how it could be solar powered. 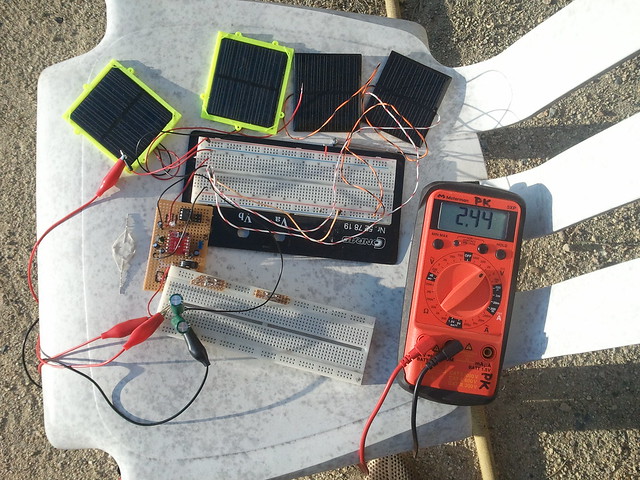 I would recommend just poking around the E-Textile Summer Camp and seeing what everyone was up to.